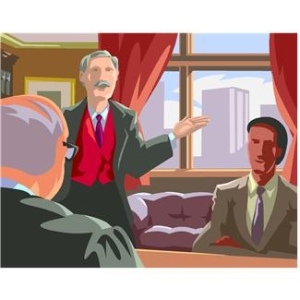 Ego… All good trial attorneys have it.  Without a little ego it would be difficult to stand up and try to persuade a bunch of strangers you just met to acquit your client or award your client a significant sum of money.  It takes not hard work and preparation, but a fair amount of moxie and courage to be an effective trial attorney.  However, it does not always pay to be the smartest guy in the room.  I learned this early on as a trial attorney while prosecuting  cases.  I would always work hard to anticipate evidentiary issues that might arise, look up cases, copy and highlight them so I was ready if a question of admissibility were to arise.  As my experience grew, I incorporated this research into my trial notebook which I have covered in an earlier post.  Sometimes in my zeal to win and impress the judge, I would jump the gun before it was really necessary and start quoting case-law and the rules of evidence or procedure to the judge.  Most judges have a fair amount of ego too and want to believe that they are the smartest guy in the room.   Even if they aren’t, most juries will think that they are. Some judges even have what is commonly called “black-robe-it is” and feel that they are infallible and will demean attorneys who dare to disagree with them.  Now, if I see that the judge is likely to take up my position on a legal point, I don’t interrupt, interject authority or case-law until I am asked to so by the Court.  It better for the judge to think your position is the judge’s own idea and take ownership of your position.  I am careful to let the judge shine as the smartest guy in the room as long as things are moving in my client’s favor.  So next time a legal issue arise, pause and see how the Court is approaching the topic before speaking.  Then you will be the smartest guy in the room, even if you are the only who knows it.

The Silent Cross-Examination… When nothing is better.

Nothing is more thrilling than conducting a good cross-examination of an adverse witness. The attorney through a series of leading questions wrangles  concessions and makes his own case through a line of short and concise rhetorical questions that lead to an undeniable conclusion in favor of one’s client.  However, there are times when no cross-examination is the best course of action. Perhaps, the witness has done no harm to your case. Or, maybe the witness is quite dangerous and your opponent has missed opportunities to bring forth damaging facts.  In fact, your opponent maybe lying in wait for you to unwittingly opened the door to evidence which could undo your whole case. Many a skilled trial attorney will intentionally set traps for their opponents by baiting them into a line of questioning for which their witness has a ready response. You may ask, why wouldn’t they simply bring it out on direct examination? Well, jurors have a tendency to pay greater attention on cross-examination than direct examination because of the inherent drama of seeing an attorney match wits with a hostile witness. The impact of evidence brought out on cross-examination far exceeds the power the same evidence has when elicited on direct examination. While it takes courage to forgo cross-examination altogether, this conservative strategy will often best serve a case. As Francis Wellman observes in his classic legal treatise “The Art of Cross Examination“:

“Nothing could be more absurd or a greater waste of time than to cross-examine a witness who has testified to no material fact against you. And yet, strange as it may seem, the courts are full of young lawyers and alas! not only young ones who seem to feel it their duty to cross-examine every witness who is sworn. They seem afraid that their clients or the jury will suspect them of ignorance or inability to conduct a trial. It not infrequently happens that such unnecessary examinations result in the development of new theories of the case for the other side; and a witness who might have been disposed of as harmless by mere silence, develops into a formidable obstacle in the case. “

There may also be occasions where the bias or inherent weakness of the witness’s testimony is so obvious that further examination can only offer an opportunity for the witness to escape his blunders or rehabilitate himself.  Under such circumstances, it is far better for counsel to dramatically rise from his table stare down upon the witness as if to begin his dissection of  his testimony and after a pregnant pause state “I see no need to ask any questions of this witness your Honor” and then sit down.  The jury will assume counsel has mercifully spared the witness further torture and has saved the jury’s precious time for more productive matters.

As noted by Francis Wellman”[i]t cannot be too often repeated, therefore, that saying nothing will frequently accomplish more than hours of questioning. It is experience alone that can teach us which method to adopt.”

Mastering the Rules of Evidence: Is it really important?

Early in my career, the “rules” of evidence were derived by reading case-law and the handful of statutes that addressed privilege and competence. If you wanted to know the “rules”, you had to research and read case-law. The only ready compendium were books like Graham’s Handbook on Federal Evidence. Today, litigators in every state and federal.court have a set of rules modeled after the ones used in federal courts.

If you want to master the rules, you need to read them through, beginning to end before every bench or jury trial. This will remind you of potential problems you need to address in you motions in limine, your exhibits and witnesses‘ testimony. You will spot problems with evidentiary proof you might otherwise overlook in your case and that of your opponent. You will better understand the policies behind the rules and the significance of the various sections of rules that deal with preliminary questions of fact, objections, offers to prove, judicial notice, relevancy, character evidence, impeachment, lay and expert witnesses, hearsay, authentication and alternate forms of proof approved for use at trial to prove a document’s content. Eventually, you will be able to cite the significant rules by number which will enhance your credibility with the judge and jury. It will also unsettle your opponent and inhibit his willingness to object to your questions, witnesses and exhibits since he won’t want to look bad in front of the jury by having his objection overruled. If you have a smart phone, there are applications that will contain the Rules of Evidence that you can readily reference such as Lawbox.

So get start today! It will increase you competence and your confidence in the courtroom.

Greetings Trial Lawyers – Need Help? – Give Me a Call.

This site is for those who practice in our nation’s courtrooms and make our adversarial system an engine for justice. All are welcome to share their knowledge and experience about what works in communicating with judges and juries.  Have a question that requires in-depth consultation for a case you are handling?  Please feel free to contact me.  I can  provide consultation services and strategic analysis on a hourly basis or through flat fee arrangement with your firm.  My office number is 317-334-9200. Thanks for visiting.