Does an Oath Inoculate a Medical Witness from Being Biased in Favor of Other Healthcare Providers? 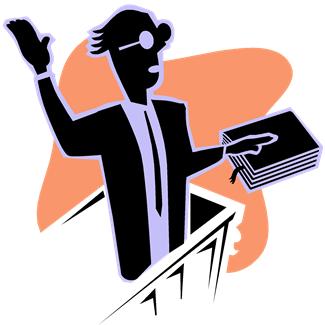 “Cross-examination is the greatest legal engine ever invented for the discovery of truth.” – John Henry Wigmore

It has long been the law in all jurisdictions of which we are aware that a witness may be properly cross-examined with respect to his interest in the litigation in question. He may be cross-examined with reference to his motives, his feelings, friendly or unfriendly towards the parties or other witnesses involved, his employment by either of the parties or some third party, and a contractual relationship with reference to his interest in the litigation and any financial considerations that might have influenced him.

[P]roof of liability insurance in and of itself is not admissible, but such a principle may not be expanded to the extent that it serves as a means of excluding otherwise competent evidence which is relevant to the issues involved in the trial. We do not think that a trial court may arbitrarily exclude otherwise competent and relevant evidence merely on the ground that it will reveal an insurance carrier is involved.

In this case, as previously stated, if a party sees fit to present a witness on his behalf, the opposing party has a right to cross-examine that witness with reference to all his interests in the litigation, including who is compensating him or giving him anything of value which resulted in his being a witness or participating actively in the litigation.

237 N.E.2d at 107-08. The Indiana Supreme Court’s rules trump any statute when the provisions conflict.  In re Termination of the Parent-Child Relationship of B.H., 2013 Ind. App. LEXIS 256 (Ind. Ct. App. May 30, 2013).  The principle that this rule of law survived the adoption of the Indiana Rules of Evidence was confirmed in Brown-Day, 915 N.E.2d at 551-52.  Indiana Rule of Evidence 411 explicitly excepts evidence of bias from the restriction on presenting evidence of insurance.  This Rule provides:

Evidence that a person was or was not insured against liability is not admissible to prove whether the person acted negligently or otherwise wrongfully. But the court may admit this evidence for another purpose, such as proving a witness’s bias or prejudice or proving agency, ownership, or control.  [Emphasis Added].

Indiana Rule of Evidence 616 recognizes that witnesses are subject to cross examination on topics addressing bias. This Rule provides:

Evidence that a witness has a bias, prejudice, or interest for or against any party may be used to attack the credibility of the witness. [Emphasis Added].

Evidence that a witness has a bias, prejudice, or interest for or against any party may be used to attack the credibility of the witness.  The fact that embraces the topic of the Patient Compensation Fund should not prevent such inquiries.  By analogy inquiries regarding a juror’s interest in an insurance company is a valid line of inquiry. In the matter of Beyer v. Safron, 84 Ind. App. 512, 151 N.E. 620 (1926), the court stated:

[L]itigants are entitled to a trial by a thoroughly impartial jury, and to that end have a right to make such preliminary inquiries of the jurors as may seem reasonably necessary to show them to be impartial and disinterested. It is a matter of common knowledge that there are numerous companies engaged in such insurance, and that many of the citizens of the state are stockholders in one or more of them. Such citizens may be called as jurors, and if at such time they are such stockholders, or otherwise interested in any of such companies, their pecuniary interest might disqualify them to sit as jurors.

Panel members should be able to be questioned regarding their financial interest in the outcome of a medical malpractice case since each of them our participants in the patient compensation fund and are financially impacted by any monies awarded from the fund.  The collective impact of favorable plaintiff’s verdicts is not trivial and has a financial impact on panel members.  The prohibition on mentioning insurance is not absolute.  Under Rule of Evidence 411, evidence that a witness was insured against liability is admissible to prove their “bias” or “prejudice”.    While recognizing all of these arguments exist, the Court of Appeals here in Indiana has refused to overturn a trial court’s discretionary decision to exclude such evidence pursuant to Indiana Rule of Evidence 403.  This rule leans in favor of admitting such evidence (unlike Rule 608 which deals with evidence of criminal convictions).  The attendant prejudice must substantially outweigh the probative value.   A trial court’s decision on this issue may only be reversed for an abuse of that discretion to n deciding this issue. In Tucker v. Harrison, 973 N.E.2d 46 (Ind. App. 2012) upheld the trial court’s decision to exclude such evidence noting:

Any specific bias on the part of the three members of the medical review panel in this case would certainly be relevant. See Ind. Evidence Rule 616 (“For the purpose of attacking the credibility of a witness, evidence of bias … of the witness for or against any party to the case is admissible.”). Each member of the review panel signed the required oath. Dr. Michelle Murphy, one of the review panel members, testified at trial that she signed the oath, that she took the oath seriously, and that she had no bias for either Tucker or Dr. Harrison when she considered the evidence and gave her opinion. (citations omitted). Dr. Margaret Miser, also a member of the review panel, also testified that she took the oath, honored it, and complied with it in her work on the review panel. [Emphasis Added].

Id. at 55.  Alas, if an oath guaranteed truth there would be no need for cross-examination or even a trial for that matter.  Bias can occur on an unconscious level and is not cured by being placed under oath.  If not, why is it so difficult to get local doctors to assist and go on the record in medical malpractice case against another doctor?      The Court of Appeals went on to observe:

[The Plaintiff’s] proffered evidence merely speculates through Dr. McLaughlin’s expected testimony that every doctor in Indiana—all of whom are required by law to participate in the Patient’s Compensation Fund and to serve as review panel members-have such an interest in limiting their financial exposure by limiting payouts from the Patient’s Compensation Fund that they would render opinions based on such interest. However, [the Plaintiff] has not shown that Dr. McLaughlin is qualified to testify about system-wide bias, if any exists, and she offers no evidence of the amount of the financial exposure doctors allegedly face from which the likelihood of such skewed opinions could be assessed. By statute, the financial exposure could be as little as $100 per year. See Ind.Code § 34–18–5–2(e). (Emphasis Added).

When balanced against the prejudicial effect of allowing evidence of professional liability insurance, the potential for bias in this case is so remote as to warrant exclusion. ***The trial court did not clearly err in excluding the proffered bias testimony.

Id.   Ultimately the issue remains one for the trial court to resolve in its discretion.  In order to succeed in present such evidence of bias, quantifying the amount of this contribution to the patient compensation fund by each doctor may be necessary to overcome a claim of unfair prejudice by the defense.   The size of this contribution by a panel member may well vary depending upon the area of practice, the doctor’s risk history and the true number of practitioner’s that participate in the Fund.  See the Schedule below and the dollar amounts of the Compensation Fund surcharge by classification of specialties found in Indiana’s Administrative Code: 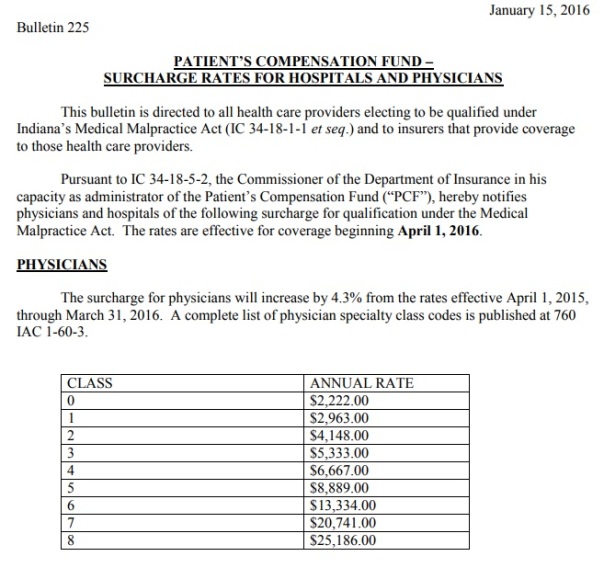 The facts the Indiana Court of Appeals had to assume  given the underdeveloped record before the trial court, substantially underestimated the amount of money contributed by doctors and other healthcare providers on a yearly basis.  While by statute, the financial exposure could be as little as $100 per year. See Ind.Code § 34–18–5–2(e).  This is not the reality. Depending on the area of practice, the actual dollar amounts contributed by healthcare providers are from 2,222% to 25,186% higher than the $100 annual fee assumed by the Court of Appeals!  The actual potential for bias when viewing the real numbers is neither remote nor trivial.   Such evidence of financial bias on the part of Panel Members should be admissible and evaluated by the finder of fact. The probative value of such evidence is high and is not substantially outweighed by the risk of unfair prejudice.